The Groninger Studentenbond (Groningen Student Union in English, abbreviatedGSb) was preceded by the Gronstra, an abbreviation for Groninger Studentenraad (Groningen Student Council). The Gronstra included all student organisations at that time and owned a reduction desk, where students could buy their books for lower prices, and its own magazine. When the sixties came to a close, the left-wing Studenten Vak Beweging (SVB, Student Union in English) gained a majority in the Gronstra, after which the fraternities left the council. Shortly thereafter, the SVB died a quiet death, causing a gap in the board of the Gronstra. A group of former board members decided to participate in the Gronstra elections under the name of ‘Groninger Studentenbond’ – and they were quite successful, as they were the only party. The Vereniging Groninger Studenten (Association of Students of Groningen), still our official name, presented its articles of association on the 1st of June 1965.

At the same time, in the early seventies, so-called ‘grondraden’ (literally ‘ground councils’) of critical students emerged in a lot of studies. The grondraden of Psychology, Sociology and Physics strived for a political student union in Groningen after the example of Amsterdam. They joined forces with the board of Gronstra, and thus in 1971 the student union GSb was registered in the Dutch Chamber of Commerce.The brand-new student union had its work cut out of it from the start. From 1971 till 1973, there was a lot of trouble about the 1000 guilders-protests. The government had decided to establish a tuition fee of 1000 guilders. The student unions were furious about this decision and organised a couple of protests. Moreover, they managed to boycott the tuition fee with such a great success that a new government was forced in 1974 to raise the tuition fee to only 500 guilders.Besides the activistism of the seventies, the GSb was to a greater extent criticised for its centralistic and undemocratic way of working. The close ties of the union with the Communist Party frustrated a lot of people, causing a decline of active members. Nevertheless, the total amount of members increased to a maximum of three thousand in 1983.The eighties meant a new time for the GSb. The peace movement, the emancipation of women and the environment became far more important for the GSb. As a consequence, material interests were increasingly neglected, thus causing a decrease in members, especially in the second half of the eighties.Nonetheless, a lot of good things took place as well. In 1983, the GSb was one of the founding fathers of the Landelijke Studentenvakbond (National Student Union), a federation of local student unions which is still the main defender of students’ interests on the national level. The last years of the eighties were characterised by the mismanagement of the Minister of Education, Wim Deetman, who tried to force through a new system of student finance. Student protests flourished in the following student protests. The GSb played a major part in these demonstrations. Eventually, the GSb took over the tasks of the deceasing HBO-union Groningen. In this way, the GSb did not only defend the interests of the RUG students but the Hanzehogeschool students as well.The first part of the nineties was a disaster for the student union. Despite the departure of the Communist Party, the union radicalised quite heavily. Defending the interests of the students didn’t seem very important. In 1993 reached the GSb rock-bottom, with only fifty members and no board. 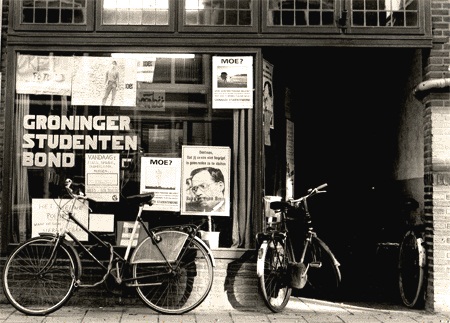 The rebuilding started in 1994. The student became again the focus of the union. Between 1994 en 1996, a wave of protests and demonstrations took place, all against raising the tuition fee and reducing the equal say of the students. The climax was reached in 1996, as some GSb activists bivouaced on the roof of an office for student finance during three cold days – as protesting against raising the tuition fee.

Not only in the field of organizing actions retrieved the GSb its origins, the union professionalised more and more. A student helpdesk was founded in 1996, with which students are supported by law students when they have difficulties with their institution, student finance and housing. Besides, the union gained its own faction in the central representative advisory body of the Hanzehogeschool in 1997, called Vooruitstrevend Overleg Studenten (literally ‘Progressive Consultation Students’). In 2000 a second faction followed, this time in the University Council of the RUG. From 2007 until 2012, both factions worked under the flag of GSb-faction, and in 2012 the union lost its seats in both councils.

Speaking of today, the GSb is an influential and strong students union with more than 350 members from which about 50 members are active in committees and working groups. Over the last years, the GSb has been busy with the new student financing system (‘leenstelsel’ in Dutch), the housing problems in Groningen and offering courses to all sorts of student organisations. Besides, the union has made a lot of effort for durability at the University and individual students have been helped with their legal problems. In these times of the worsening of the position of the student, a union that stands up for the rights and interests of every student is more necessary than ever.